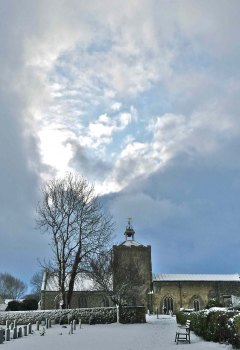 St Clement's serves the parish of Burnham Overy. The parish is in two parts: Overy Town and Overy Staithe. The church is situated in the hamlet of Overy Town.

St Clement’s was a large cruciform building, begun in the Norman era.

The transepts are no longer in existence, except for the short remains of the southern one which is used as a vestry. It also retains its south aisle to the nave and south porch.

The central tower has been lowered and is now topped with an attractive bell turret.

The interior of the church is unusual. As the area beneath the tower arches was blocked off during the long centuries between the Reformation and the Victorian revival, the nave was used as a church, whilst the chancel became among other things a village school. The two parts are now reunited but still only connected by a narrow passage.

The area beneath the tower since 2016 has contained the vestry, toilet and kitchenette. Services are normally held in the nave.

The church is fitted with a loop system.  Its roof was renewed in 2016, having received a major grant from the Historic Places of Worship Roof Repair Fund.

The church has an unmetalled  car park to its east, which is open on second Sundays of the month and for the duration of other acts of worship or special occasions.

Overy Staithe is at the mouth of the River Burn which runs into a tidal creek, attracting many holiday makers. Popular activities include:

There are approximately 265 houses of which 60-65% are holiday homes.

Permanent residents and weekenders are all very much part of the community.